Get the entire trilogy in one convenient e-book! Follow Thomas, Sarentha, and Eliza on their entire journey, from uncovering a terrifying truth, right through to the war for their empire.

What would you do if you were surviving on stale bread and water and were offered a feast? All it would cost you is your unquestioning aid. Thomas and Sarentha, two fugitive lumberjacks, find themselves in this exact position when a mysterious nobleman offers them more money than they ever dreamed possible. Teaming up with the nobleman’s spirited niece, Eliza, they travel around the Tamorran Empire and beyond. Through their adventures they learn that the world is far larger and more magical than they could have imagined. At the heart of it all is the reason for the nobleman’s secrecy: a terrifying truth, lost to time.

Thomas, Sarentha, and Eliza will learn that peace never lasts. After fighting for their freedom, wicked forces beyond the Tamorran Empire’s borders rise against them. Tamor’s king falters when threats of genocide and an undead plague arise. The would-be heroes must fill new roles of responsibility and power to hold Tamor together.

When more menaces emerge, each darker than the last, their adventure spans the entire continent. Thomas, Sarentha, and Eliza must make difficult choices and face their darkest fears to uncover their lost history by reviving long-dead wizards. Only by illuminating the past will they be able to step into the future.

One misstep could lead to their undoing.

After more than four months abroad, Eliza, Thomas, and Sarentha return home in the face of dire warnings and sweeping changes in the empire. They go their separate ways to reflect on their lives and look for ways to move forward. New allies and enemies emerge, and grave challenges face the up-and-coming heroes. They will need to come together, combining their wits and strengths, to overcome ancient foes. In the balance is the world of Illuma: will it enter an age of light, or will it plunge into everlasting darkness, ruled by demons and the undead?

The demon lord Zeracth has a plan to take an army to the world of Illuma. However, his spawn Glezxnodin has his own plans to save his people and create a demon nation.

Illuma at first appears ripe for the taking, but the world has changed since the demons fled ages ago and many new challenges await them.

There is a glossary at the back with pronunciations for demon names.

Eshe’s peaceful meditation is disturbed by a barbarian raiding party. While raids on the outlying farmlands are not an uncommon occurrence, this attack holds dangerous surprises. Can Eshe and the order of monks protect the city of Bisoro against these new threats?

Dawn: A dwarven story of creation

“In the beginning was Nothing.”
The dwarven holy book recounts the story of creation, not just for the world of Illuma, but for the universe.

“A great battle brought two heavenly brothers into our existence.”

The universe was created through conflicting forces of light and dark, and so it continues. War has ravaged Illuma throughout its history, and this collection of short stories gives readers a sneak peek at four pivotal moments.

The first short story is completely free, if you view the sample on Smashwords. Amazon has a set sample percentage, so you probably won’t get it all.

Amurtag and her fellow minotaur farmers are called away from the harvest by the priests. Margaff, their new chief, is making a play for power over all the minotaur tribes using a secret weapon. But when Amurtag questions him publicly, he shares his power and vision for the future. The question is, will everyone stand by and allow him to take control?

Hannah, a suburbanite mother of two, runs afoul of a demon-possessed moose in rural Northwestern Ontario. 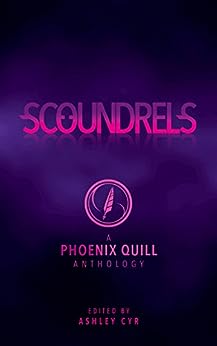 The Han Solo to Luke Skywalker or the Moriarty to Sherlock Holmes. The White Witch of Narnia or the pig Napoleon. Carmilla or Loki or Black Mariah. There’s more than can be listed, and and all too often, we fall in love with them: Scoundrels.

Whether they’re villains or rogues, merciless killers, or thieves with codes of honour, so often, they steal the show. The tight-laced lead plays the straight man or woman to their jokes and schemes.

Included in this anthology are stories about thieves with hearts of gold, and adventurers who aren’t so noble.

Meet a wayward son who returns a Rainmaker. Find out what happens when a fourth grader uses a computer to find the secret of reality. Sit with Grandfather while he tells you about the Light… and the Dark. Ten original myths by ten amazing authors.

My own short story, 1100 BGW (listed above), is tied to my novel series and illuminates Emperor Margaff’s rise to power through Amurtag’s eyes, one of his more skeptical subjects.

The world is burning, but thanks to Canadian ingenuity, humanity might be saved. But what happens when the potential saviour cannot shake her depression? Accepted by Dark Helix Press, and scheduled for release in early 2019.

Three (maybe four) short stories will be released prior to the first book in the Strongblade Sibling series. They aren’t necessary reading, but will add flavour and act as teasers for the book.

Grace, a mercenary, is guarding a wagon on its way to Chalice when she sees another cart being pilfered by bandits. Whatever the highwaymen stole, it was worth killing over, but the driver issues an ominous warning about a thieves’ guild called The Eye. The more she learns, the more unsettled she becomes.

Sardo is cleaning out horse stalls when she is approached by a nobleman who makes plain his desire for her. What he gets is a stern rebuff and a threat. It’s not long before Sardo is confronted by a shadowy friend who warns her that there’s a price on her head, and she had best leave town before he comes to collect.

Traithaius (Trai for short) is a socially awkward tailor who runs a shop in the heart of Stowenguard. On his sixteenth birthday, a customer comes in with a strange request that puts Trai on edge. After a series of questions, he is convinced the customer is attempting to enter the local wizard’s school fraudulently. But how to handle the pompous liar?

A Queen’s Edict (Book 1 in the Strongblade Siblings series)

Over 400 years have passed since the end of the Empire’s Foundation trilogy, and the heroes Thomas, Sarentha, and Eliza are distant memories. It is time for their descendants to discover their fate when the queen calls upon them. With a long-time war raging between the north and south, the people of Stowenguard need heroes to shift the war in their favour. Will Grace, Sardo, and Trai have what it takes to bring the battle to the vile Lord Torrak in Pythos?

The story is ready for the editor and I hope to have out in 2020.